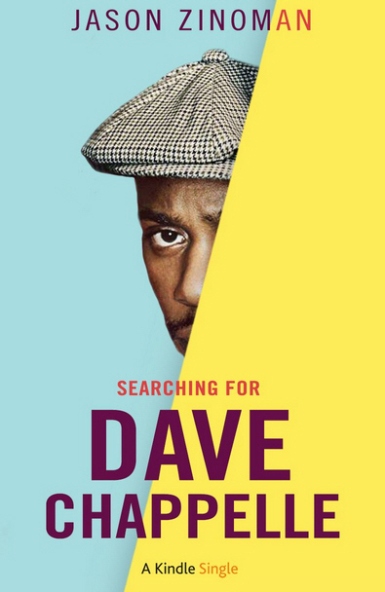 Determining the reason why Dave Chappelle walked away from a rumored $50 million deal with Comedy Central when he was ostensibly on top of the American pop culture pyramid is a parlor game many comedy and entertainment junkies have engaged in for nearly a decade.  New York Times writer Jason Zinoman doesn’t really present any new theories in his insanely readable 54 page Amazon Kindle Single “Searching for Dave Chappelle,” but it’s the best profile on Chappelle’s career I’ve ever read and provides a lot of food for thought not only about comedy, but also about race, success, fame, spirituality, and happiness.   Along with Joe Eszterhas’s “Heaven and Mel” and Joshua Davis’s “John McAfee’s Last Stand,” “Searching for Dave Chappelle” is a fine example of how damn good a Kindle Single can be.

And if you like what you read, you should really pick up Zinoman’s terrific book on 1970s horror films “Shock Value: How a Few Eccentric Outsiders Gave Us Nightmares, Conquered Hollywood, and Invented Modern Horror.”

A great interview with legendary screenwriter Joe Eszterhas by Howard Stern from June 2012, focusing on Eszterhas’s disastrous collaboration with Mel Gibson. Pretty funny in a lot of spots, but also a fairly disturbing look at Gibson. If you’re interest is piqued, you seriously need to read the Amazon Kindle single “Heaven and Mel”which goes into much more detail. It’s the length of a 150 page book, but it’s only $2.99. One of the most harrowing and hair-raising True Hollywood Stories you’ll ever read. To be fair, aside from Mel’s minor rebuttals, we haven’t heard Mel’s complete side of the story. However, Eszterhas does make a good case and rightly or wrongly, as Mike Ovitz learned, “Don’t f–k with Eszterhas!”

Lots of bad language and adult subject matter so not safe for work or little ones.