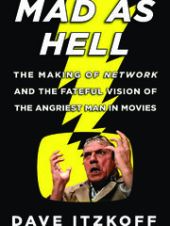 Paddy Chayefsky’s “Network,” a brutally funny and depressing view about American television, is one of the most highly acclaimed (and sadly prescient) satirical films ever made.  Scripted by Chayefsky and directed by Sidney Lumet, it was critically lauded and was also a decent-size box-office hit, a rarity for a satirical film.

Dave Itzkoff’s superlative account of the making of “Network” and its influence on modern news / broadcasting is a wonderfully entertaining read and is recommended for anyone who has an interest in comedy, 1970s Hollywood, broadcast journalism, and Chayefsky.   Itzkoff not only paints detailed backgrounds of all the principals involved, but also quotes many of the actors who had minor but pivotal roles in the film.  Itzkoff’s last chapter deals with the influence of “Network” among broadcast journalists, including some (Glenn Beck, allegedly a huge fan) who seem to have missed the point of the film entirely.

My own feelings about the film are positive, but a little mixed.  In the plus column are the acting performances by Peter Finch, William Holden, Faye Dunaway, Beatrice Straight, Robert Duvall, Ned Beatty and several others.  Also in the plus column is Lumet’s realistic, almost deadpan direction which is the appropriate tone for a movie that gets increasingly outrageous.  And yes, Chayefsky’s script is very good and is justly famous as one of the greatest scripts of all-time.  Chayefsky’s hellish vision of television news devolving into cheap entertainment seemed outrageous in 1976, but is nowhere near as ridiculous as what passes for “news” these days.

However, the problem is also … Chayefsky’s vision.  The film’s strident tone, the shrill manner in which the dialogue is often delivered, and the endless harangues and speeches really grate on the nerves.  Unlike most films, this can’t all be blamed on the director (Lumet), since Chayefsky was the one who insisted on complete creative control (probably one of the only writers who had this much autonomy over what they wrote).  Whatever you don’t like about Spike Lee or Aaron Sorkin (who always deliver their points with a sledgehammer) can be traced directly back to Chayefsky’s script for “Network.”  The most grating character is, ironically, the one who is supposed the be the voice of reason, William Holden’s Max Schumacher.  While I agree with some of the sentiments of what he has to say, the tone comes off as unbearably smug.   I don’t know how much of that is due to the way Holden interpreted the character or what he’s been given to say.  Either way, in the second half of “Network,” Schumacher comes off as pompous and self-righteous and it leaves a bad taste.   I realize I shouldn’t be showing this scene out of the context of the film (I urge you to see it in full and make up your own mind), but it’s the clearest example I can find for why this film doesn’t sit well with me, even thought I admire it very much.

Easily one of the Top 5 best books I’ve read about American film history is Mark Harris’s terrific 2008 tome “Pictures at a Revolution.”  “Pictures” focuses on the five films nominated for the Academy Award for Best Picture in 1967 and through chronicling the genesis, production, and release of these films, Harris makes a strong argument that this was the tipping point between the Hollywood of old and the “new Hollywood” that emerged in the 1970s.  If you enjoyed Peter Biskind’s seminal 1970s Hollywood chronicle “Easy Riders, Raging Bulls,” “Pictures” is a worthy prequel and, arguably, just as complex and readable as Biskind’s famous book.

However, please note that while Harris focuses extensively on the five Best Picture nominees of 1967 (“Bonnie and Clyde,” “Dr. Doolittle,” “The Graduate,” “Guess Who’s Coming to Dinner,” and “In the Heat of the Night”), this isn’t the limit of the tale that “Pictures” tells.   Harris paints vivid portraits of the creative forces behind these films (Mike Nichols, Warren Beatty, Arthur Penn, Stanley Kramer, Sidney Poitier, Rod Steiger, Norman Jewison, Rex Harrison, Faye Dunaway, Francois Trauffaut, Buck Henry, Katherine Hepburn, Spencer Tracy, Anne Bancroft, and Joseph E. Levine among several others) as well as other films from the era that were also making a huge impact (“Jules and Jim,” “Who’s Afraid of Virginia Woolf?,” “Blow Up,” “The Sound of Music,” “My Fair Lady,” “A Patch of Blue” among several others).   While “Pictures” may not be as gossipy as Biskind’s classic, it serves as a wonderfully entertaining social history of how 1960s Hollywood reflected (and in many cases, resisted) the cultural changes that swept the nation during that tumultuous decade.  If you have any interest at all in film or social/cultural history, Harris’s book is a must-read.

Favorite anecdote:  Warren Beatty is showing “Bonnie and Clyde” to Warner Brothers studio head Jack Warner.  Warner advised that if he has to get up to go to the bathroom, the picture will not work.  Warner excused himself three times to use the restroom.  At the end of the screening, Warner advised that the film was terrible because it was “a three-piss picture.” Beatty tried to flatter Warner by saying that “Bonnie and Clyde” was an homage to the gangster movies that made Warner Brothers a huge success in the 1930s.  Warner’s reply: “What the f–k’s an ‘homage’?”