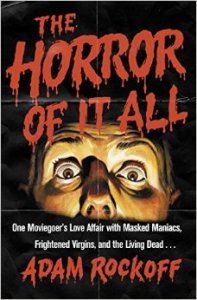 In the introduction to “The Horror of it All,” author Adam Rockoff admits he’s attempting to do for horror films what Chuck Klosterman did so expertly with his debut book “Fargo Rock City” for heavy metal music: provide a combination memoir  / detailed analysis of a favored … and here’s a word that Rockoff detests … “genre.”  And I’m happy to say that Rockoff’s book is the equal to Klosterman’s brilliant and immensely entertaining debut book.  Regardless of whether you’re a fan of horror films or not, “The Horror of it All” is an incredibly fun and thought-provoking read.  I don’t agree with all of Rockoff’s assertions here (though to be fair, I haven’t been much of a horror fan since the 1980s), but you don’t have to be a horror fan to groove on the depth and passion with which Rockoff discusses horror films and American culture.   And while you may disagree vehemently with what he has to say, the man undoubtedly knows his s–t and can talk about it in a way that kept me riveted for its nearly 300 pages.

Yes, horror fans may find a lot to quibble with here, since Rockoff gives contrary views of such horror classics as “The Exorcist,” “Alien,” and “Halloween.”  Film snobs may disregard Rockoff’s serious discussion of films like “My Bloody Valentine” and “The Burning.”  But I welcome a sincere and intelligent discussion of any film, especially if I think a particular film is crap (mainly because I’m one of the worst offenders of rushing to judgment on most topics).  One of the highlights of “Horror of it All” is a chapter that takes down Siskel & Ebert’s legendary condemnation of slasher films, point by point, as if Rockoff is Jim Garrison analyzing the Zapruder film of J.F.K.’s assassination.  Also welcome is his objective analysis of the clumsy marriage of heavy metal and horror films, as well as the P.M.R.C. hearings of the mid-1980s.  Rockoff actually made me feel sympathy for Tipper Gore for the first time, even though he obviously disagrees with her position.

There’s a lot to chew on here, but if you have an open mind and a good sense of humor, this is a marvelous and very smart critical look at horror films.  Dave says check it out!

One of my favorite pieces of rock criticism … as well as psychology about a certain type of “friend” many people have during their teens / early 20s … is Chuck Klosterman’s analysis of Ted Nugent from the book “Fargo Rock City”:

“My problem with Ted Nugent is that guys who aspire to be like him – or are just like him by default – make me feel ashamed for liking hard rock. They have no sense of of humor and they beat people up and they kill cats for no reasons. They get totally f–ked up on Budweiser anytime they’re in public; if they smoke pot, they only do so when they’re already drunk, so they never get mellow … Once you become friends with these people … you can never relax. If you get drunk with these guys, they will write on your face with a black Magic Marker. They will literally p–s all over you. They will steal your car and intentionally drive it into a ditch … If you’re not consciously being an a–hole to someone else, you will become a victim. And what can you do? Nothing. And why not? Because these are your goddamn friends.”

The link above will direct you to a sample chapter from the upcoming Chuck Klosterman book “I Wear the Black Hat: Grappling with Villains (Real or Imagined).” (What?! You haven’t preordered it yet?) This chapter is about all the musicians Klosterman hated from 1984-2003 and how he came around on some of them … or just didn’t care anymore. Like most of Klosterman’s criticism, much of it is funny and provocative. However, a particular passage stands out:

“Somewhere in 2003, my ability to hate the Eagles (or Coldplay, or Dave Matthews, or Mumford and Sons, or whoever) just evaporated. I could no longer construct antipathy for random musicians, even if they deserved it. My personality had calcified and emancipated itself from taste. I still cared about music, but not enough to feel emotionally distraught over its nonmusical expansion into celebrity and society. And this was a real problem. Being emotionally fragile is an important part of being a successful critic; it’s an integral element to being engaged with mainstream art, assuming you aspire to write about it in public. If you hate everything, you’re a banal a–hole . . . but if you don’t hate anything, you’re boring. You’re useless. And you end up writing about why you can no longer generate fake feelings that other people digest as real.

There needs to be more awareness about the cultural impact of reverse engineering, particularly as it applies to fandom and revulsion. It’s the most important part of describing the day-to-day import of art, which is ultimately what criticism is supposed to do. But there are no critics who can admit to their own reverse engineering without seeming underinformed. It’s like arguing that the greatest Russian novel ever written happens to be the only one you ever finished.”

The link above takes you to the full chapter, as opposed to the small excerpt of the chapter that’s in the print edition of Entertainment Weekly this week. And if you like what you see, be sure to check out any of Klosterman’s non-fiction books, especially “Fargo Rock City” and “Sex, Drugs, and Cocoa Puffs.”