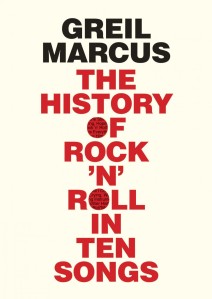 Greil Marcus’s “The History of Rock ‘n’ Roll in Ten Songs” is one of the finest, most beautifully written books about music, art, and culture of all-time.  When Marcus wrote this book, he decided to avoid songs that most people would insist would be on a list of ten songs that would explain rock ‘n’ roll.  The songs Marcus selected are:

“Shake Some Action” – The Flamin’ Groovies
“Transmission” – Joy Division
“In the Still of the Nite” – The Five Satins
“All I Could Do Was Cry” – Beyonce
“Crying, Waiting, Hoping” – Buddy Holly / The Beatles
“Money (That’s What I Want)” – Barrett Strong / The Beatles
“Money Changes Everything” – The Brains / Cyndi Lauper
“This Magic Moment” – The Drifters
“Guitar Drag” – Christian Marclay
“To Know Him is to Love Him” – The Teddy Bears / Amy Winehouse

The songs he selects are all great in their own way, but may not be obvious choices in many peoples’ definitions of songs that define rock ‘n’ roll.  Yet, these songs, in the way Marcus describes them, tell an incredibly rich story of not only rock music, but American culture / history… with a few sidelines into British culture.  Marcus has been one of our finest cultural critics for over 40 years and this book equals his classic 1975 book “Mystery Train,” (which has since gone through 7 editions with additional notes by Marcus).

I will let Marcus explain why he included “Shake Some Action,” from an interview he did with Henry Rollins, who narrated the audio version of the book:

“The History of Rock ‘n’ Roll in Ten Songs” is a terrific achievement and even if you don’t agree with Marcus’s selections, I guarantee he’ll make you a true believer.  If you need further convincing, you absolutely need to check out the audio version narrated by Henry Rollins.  Rollins is an extraordinary orator and the way he conveys Marcus’s words shows a profound respect for Marcus and his thoughts. Easily one of the five best audio versions of a non-fiction book … and that includes Robert Evans reciting “The Kid Stays in the Picture.”

At the link below is a lengthy interview Rollins did with Marcus about the book that’s worth hearing: