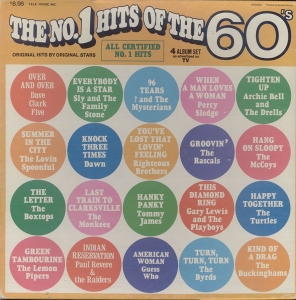 When I was about 5 years old or so, there was a 4-album set called “The No. 1 Hits of the 60s” that was advertised on TV constantly by a company called “TeleHouse” that retailed for $8.98. I remember the original ads from TV, especially a scene where some long haired guy was hanging from a window ledge while the McCoy’s “Hang on Sloopy” played behind him. Anyway, my Mom bought this box set and as soon as it arrived, I took it upstairs to the record player in my room and checked it out.

One of my favorite songs on the box set was Tommy James and Shondells’ “Crimson and Clover.” I played this over and over again and it wasn’t until I was much older that I realized that this was pop psychedelia at its finest. This wasn’t an “authentic” acid freakout ala Iron Butterfly. This was a pop group trying to adopt the psychedelic sound, but they did it very well … and a lot better than Iron Butterfly. The version here is the exquisite long version that was on the box set my Mom purchased, with the extended acid rock guitar solos and sound effects. Joan Jett did a fine cover in 1982, but it doesn’t top the original.