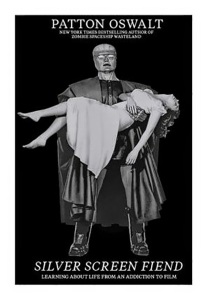 Attention all comedy and film nerds … Patton Oswalt’s latest book “Silver Screen Fiend: Learning About Life from an Addiction to Film” just dropped today. Great book. However, my only complaint is the same complaint I had about his first book “Zombie Spaceship Wasteland” … too f–king short (though not as short as “Zombie”)!

Key takeaway (a realization by Oswalt after spending all hours of the night with his friends complaining about “Star Wars Episode One: The Phantom Menace” in 1999):

“Movies – the truly great ones (and sometimes the truly bad) – should be a drop in the overall fuel formula of your life. A fuel that should include sex and love and food and movement and friendships and your own work. All of it, feeding the engine. But the engine of your life should be your life. And it hits me, sitting there with my friends, that for all of our bluster and detailed exotic knowledge about film, we aren’t contributing anything to film …

And here I am. I’ve traded a late-morning coffee shop for a late-night, post-screening bar, angry at George Lucas for producing something that doesn’t live up to my exacting standards, and failing to see that the four hours of pontificating and connecting and correcting his work could be spent creating two or three pages of my own.”

Did I mention this was an awesome book?  Dave says check it out!